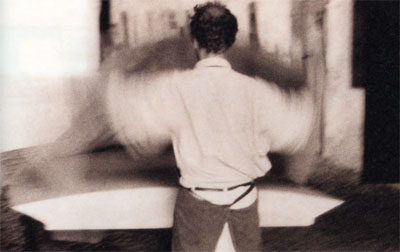 Looking at a XVI century icon, we rarely consider, beside its value as a painting, the incredible events that are behind it. If we read the accounts, now history, that followed the various edicts and councils on the question of iconoclasm and the renewed cult of images, we are dismayed and incredulous at how much tension, suffering and devotion they managed to evoke. In that period, that saw not only the personal destiny of religious men at stake, but also the strategies of secular empires and ecclesiastic hierarchies, reaching up with near egual thrust to the beginning of this century in Russia itself, where icons owe to large extent their origins and distinctive characters.
Malevich’s extraordinary Suprematist intuition revealed through The Black Square (1913), an extreme chapter of epic tradition in mystical painting. XIX century painting owes him the chance to reclaim picture space, a place of supreme expression of a non-objective moral belief: the space around a painting. Malevich’s action was solidly grounded, based on orthodox iconographic culture and helped to open, on that foundation, a new possibility for painting of the future. We can appreciate that today both because of what was produced following his work and because of the dramatic outcome of his personal life and of his generation’s– this in anticipation (then unrecognized) of the catastrophe that was to engulf this country and European history itself.
The darkening of an image invokes a consumption, a slow wea ring-out, a stratigraphic deposit of outside agents alien to the picture, such as dust, smoke or other elements deposited over time on the artist’s original work. In the hands of a XX century painter, on the other hand, a choice of a dark field, of chromatic withdrawal, conveys a radical determination, a will to produce a “ground zero”, essential to eliminate all previous conceptions and open up to new speculations.
I believe Mats Bergquist’s contemporary work should be linked to that source, critical of all previous painting while extremely rich in itself. Although relying on other, more articulated veins of inspiration, not excluding a return to the disciplines of constant meditation, the generating drive of any true spatiality, it has always felt the need to regain a register of its own on that supremacy of univocal chromatism. Indeed, if we look at the process that brought Bergquist to his present work, documented in these pages, we notice how he constantly made the same linguistic choice, in considering a non-objective chromatic field, almost uniform in the layout of colour and mainly mono- di- or trichromatic, purely abstract with the use of opague or scarcely brilliant colour. Even if we go back to the work conceived and executed in Farfa, Italy, which is dichromatic with alternating stripes, and was compared by some to Burens surfaces, (which I believe wrongly) because the French artist (as well as Mondnan] never subscribed to diagonal linearity nor to layers of erasures and abrasions, which are present in Bergquist’s work and where the chromatic choice is reduced to a very few elements. The whole of these works, at the beginning of the Nineties, could rather be more coherently compared to some pictorial alphabet of Sol LeWitt, bound to forms of stripes of various colours and black and white, and found even in some wall drawings in Italy.
Bergquists’s works made in Farfa, Untitled, produced with oil on copper based oxidations and of various dimensions, already formulate a dark quality within themselves, more completely and clearly reaffirmed in the extreme cycle at the end of the Nineties. 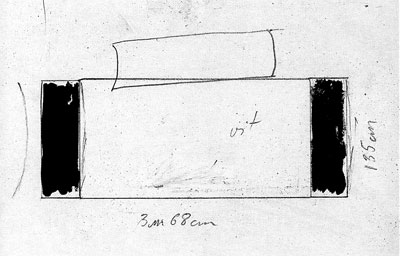 A more stringent sequence of relations between these recent works and the rest of Bergquist’s production should rather be linked to the first “icons”, immediately mentioned by the contemporary philosopher Hans Ruin who evoked, this time correctly, a “sense of sacred” and some connection with Barnett Newman’s work, as well as the remarkable group of tempera works created between 1995 and 1997 on different supports and of differing sizes, that have seen myself at the exhibition arranged in the Sodermanlands museum in Nyköping, Sweden, during a trip taken in 1997.
Even though for that part of his production Bergquist has allowed the notion tha this choice of partiality could well be coming from certain Venetian iconography and especially from the spare three part background of Alvise Vivarini’s Madonna col Bambino, that he himself attests as a reply to Nina Weibull’s critique as a possible inspiration for his tempera, that particular point of references appears now to be no more than the first spark, or rather a starting point of a process of progressive refining towards an interior dimension that has long been bestowini a precise emotional and meditative investment on icons and their potentiality. I recall by analogy one more suggestion, the spatial disposition of the exhibition in Nyköping reminding me of another Renaissance work, the painting by Beato Angelico on the opening of the sepulchers, with a perspective flight from the main sarcophagus towards an open landscape.
Already in the works of those two years there is an affirmation of spatiality that brings a strong element of proportional relationships between structural chromatic fields in each tempera work; usually two, three or more adjacent fields to compose a diptych as in Interior (1995) or Triptych (1995) or the four parts Lazarus (1997) or the large size (305 x 230) Untitled (1996). In addition, the paintings already showed the curved surface that has now become a distinctive element, with great or small relevance, but constant in every work. This curvature, besides evoking the natural deformation of many old paintings, both small icons and large altarpieces, conferred a slight swelling to the surface. almost a holding of breath, softening the rigidity of the works.
In the monochromatic painting of the Sixties and Seventies, Graubner had turned his attention to the spatial value of surface swelling, with evident and emphatic jutting out effects, achieving interesting results.
In Bergquist, however, this attention to curved surfaces is an evident remake of “historical painting’s curvatures, almost a visual quotation. On the subject of references, the works seen in Nyköping seemed to have rules of proportion and chromatic relationships more in line with Bnce Marden’s painting in the Seventies and Eighties, rather than with Günther Forg’s although the latter appeared more mercurial and volatile in use of supports and in the very way to use colour; Marden’s orthodoxy in painting and in treating space, rhythmically harmonious and proportionally inclined to “golden rules” could be called upon to give some previous reference to Bergquist’s earlier work . 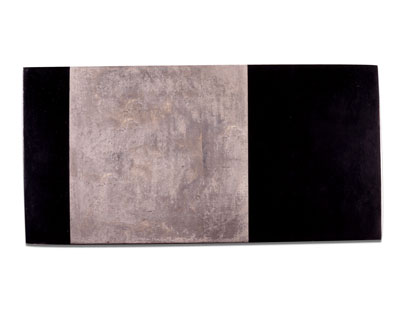 With this last creative development, elaborating on the aspect of reductiomsm in the linguistics of his whole work, Bergquist confirms, both from the conceptual and the technical point of view, his inclination towards an iconographic non-objectivity.
Recently, his search into meditation and Zen practices has reaffirmed a radicalization of his choice of chromatic variations in those works that have been defined around the antinomy of the black and white relationship. Indeed the new works, based almost exclusively on the technique of icon production and therefore on linen-covered wood, treated with various layers of glue, plaster and pigments with abrasion of previously curved surfaces, and finished off with encaustic work, seem to affirm the absoluteness of choices that are behind the Neosuprematistic thinking, its conceptual orthodoxy touching on the sphere of real life.
In the Bassano and Marostica residences where Bergquist now works, the series of a hundred Guides (1998) has emerged, inspired by Tarkowsky’s film Stalker- wooden modules bearing white or darkened by the encaustic works if by burning at the top of their surface, a marginal deeply black area obtained with vine black or with an ivory black of substantial opacity. In addition to this series of works, exalted by an attentive and austere manuality, we also have far-reaching works such as Icon (1999) or Codex (1999) where well-defined rules of proportion and significant balance can be read.
Among the types of wood used as a base, we find cherry wood, lime tree and the Hungarian pear tree. The latter has also been used to create a variegated series of cubic volumes, designed in different ways but all bearing one side slightly curved downwards, like a dome pulled down by the four vertices of the cube.

Although conceived as a whole, the single cubic units can occupy space as “fragments”, but lacking the absolute vocation claimed by the large paintings. These last morphologies stress the primary and supreme value of the body of work, its desertification and casting away of narrative trimmings, a necessity of iterative gestures, dominated by time, that, together with a feeling for colour or rather, a talent for its subtraction, have produced a look of meditated and experienced manual skill, like a prayer, for each one of these works. A newly advancing front of spiritual intensity that shares what is “sacred” with the authenticity of inner being and the invisible manifesting itself, through the manual work on materials and their proportions.
Through acts of new transformation, influenced by poetic desire, creating equilibrium between shadow and light, stasis and osmosis, absent and living. 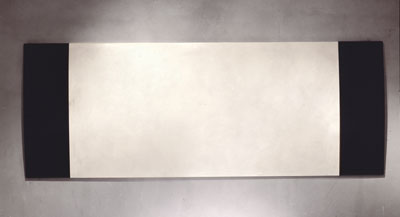 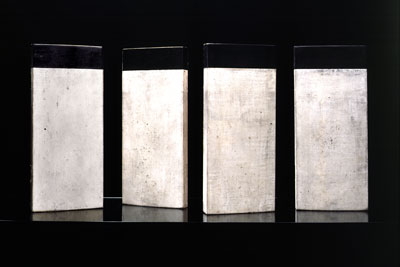 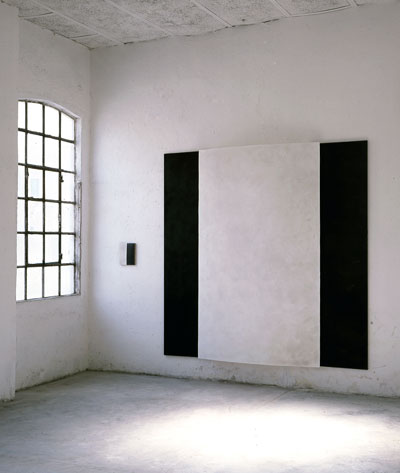